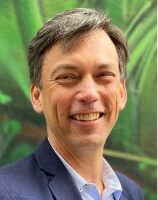 Brad has extensive experience working on climate change, renewable energy and energy market issues. He joined the Climate Change Authority in November 2018, an independent statutory agency responsible for advising the Australian Government on climate change policy. Brad has overseen the preparation of numerous reports, including the Authority’s Review of International Offsets (2022), Paris Plus: From Cost to Competitive Advantage (2021) and Economic Data for a Decarbonising World (2021).

Previously, Brad was head of the International Climate Change and Energy Innovation Division in the Australian Government Department of the Environment and Energy, where his responsibilities included advising on clean energy innovation, Australia’s greenhouse gas inventory and international climate change policy. Brad led negotiations on behalf of the Government leading to the granting of the first offshore wind farm exploration licence in Australia. Brad has been working on climate change policies for the Australian Government since early 2011.

Prior to this he worked on a range of issues in the Australia Treasury, which he joined as a graduate in 1991, including international taxation, economic forecasting, Commonwealth-State financial relations and competition and infrastructure policy. Brad has a Bachelor of Economics (Hons) and a Master of Information Management.