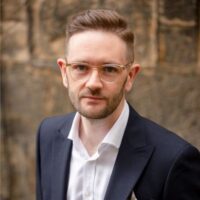 Chris Stark is Chief Executive of the Climate Change Committee, the UK’s statutory climate advisers. Chris led the Committee’s work to recommend a ‘Net Zero’ target for the UK, the world’s first legislated Net Zero target. He has since directed the development of detailed pathways for the UK to reach carbon neutrality by 2050. In 2021, he presented the UK’s third climate change risk assessment, with detailed analysis and advice on the extensive risks facing the UK from climate change.

Chris has held a number of senior roles in central government, including in HM Treasury and as Director for Energy and Climate Change in the Scottish Government. He is a regular commentator in national and international media and featured in David Attenborough’s documentary, ‘Climate change–the facts’. Chris regularly speaks publicly on the urgent need to confront climate change and the economic benefits of rapid cuts in greenhouse gas emissions.