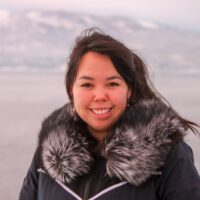 Enooyaq Sudlovenick is a PhD student at the University of Manitoba, studying beluga health in the Inuvialuit Settlement Region and Arviat Nu. She uses Western methods (serology, contaminants) and Inuit Qaujimajatuqangit to gain a wholistic view of beluga health. Ms. Sudlovenick also did her Masters in Science in Wildlife Pathology assessing the health of ringed seals in Iqaluit, Nunavut and documented Inuit Qaujimakatuqangit (Inuit knowledge) about the animals and won several awards. She was born and raised in Iqaluit, Nu.