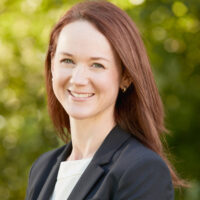 Kate Lindsay is responsible for working with FPAC members to advance the industry’s position on key legislative files and environmental leadership, including; climate action, sustainability, adaptation and resiliency, species at risk and biodiversity conservation. Ms. Lindsay has been with FPAC for over eight years, prior to this role, she was VP, Sustainability and Environmental Partnerships and Director of Conservation Biology. Ms. Lindsay has been selected to participate in formal advisory roles to the federal government, including as co-lead of the Species at Risk Advisory Committee (SARAC) and a member of the Pathway to Target 1, National Advisory Panel (NAP).

Ms. Lindsay is from British Columbia and prior to working at FPAC, she held roles with government, the forest industry and with an environmental consulting firm. Kate graduated with a BSc from the University of Victoria, and is a Registered Professional Biologist (R.P.Bio).