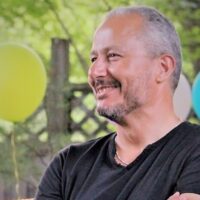 As an Indigenous ally of German/Egyptian ancestry, Dr. Tonio Sadik is the Senior Director of Environment, Lands & Water at the Assembly of First Nations (AFN). In this capacity he leads several national committees, including the AFN/Canada Joint Committee on Climate Action, and is a principal investigator with the 10-year Food, Environment, Health and Nutrition of First Nations Children and Youth (FEHNCY) study. He is also a board member with the Climate Reality Project (Canada). His interests include climate change, biodiversity-loss and conservation, particularly as these relate to Indigenous Peoples. His work has involved multiple national and international collaborations, including participating as a member of Canada’s delegation to the United Nations’ Convention on Biological Diversity. He also teaches part-time in the Faculty of Social Sciences at the University of Ottawa.