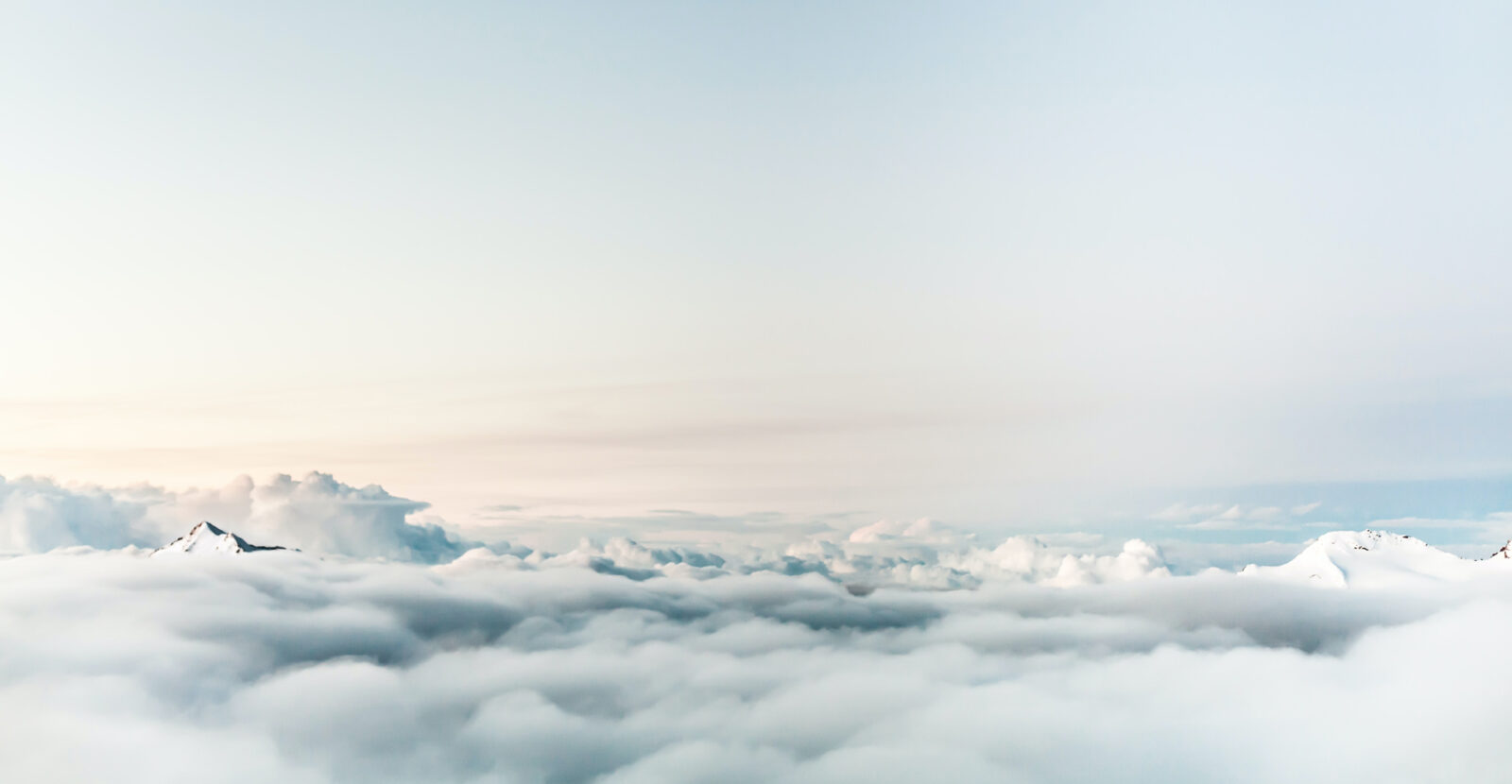 Improving and protecting human health is a key part of a clean growth transition. Health and climate outcomes are linked by the emissions we release into the atmosphere: some are greenhouse gas emissions and contribute to climate change, while others are air pollutants that are harmful to human health. In many cases, these air pollutants and GHG emissions are emitted at the same time from the same sources. As a result, Canada has significant opportunities to improve health as it accelerates action to reduce GHG emissions.

The data in Figure 10.1 highlight a few notable trends. Overall, most Canadian cities in the figure achieved the 2020 and 2025 CAAQS in 2017–18, with a few exceptions. Vancouver was the only city in the figure that failed to meet the 2020 CAAQS for nitrogen dioxide; however, NO2 levels in Edmonton and Toronto exceeded the 2025 CAAQS. Two cities failed to meet the 2020 CAAQS for fine particulate matter (Edmonton, Saskatoon). None of the listed cities exceeded the CAAQS for ground-level ozone (smog), but many came close to the standard. As CAAQS continue to tighten over time, many towns and cities across the country (including many not in Figure 10.1) will need to improve ambient air quality to meet the national standards. 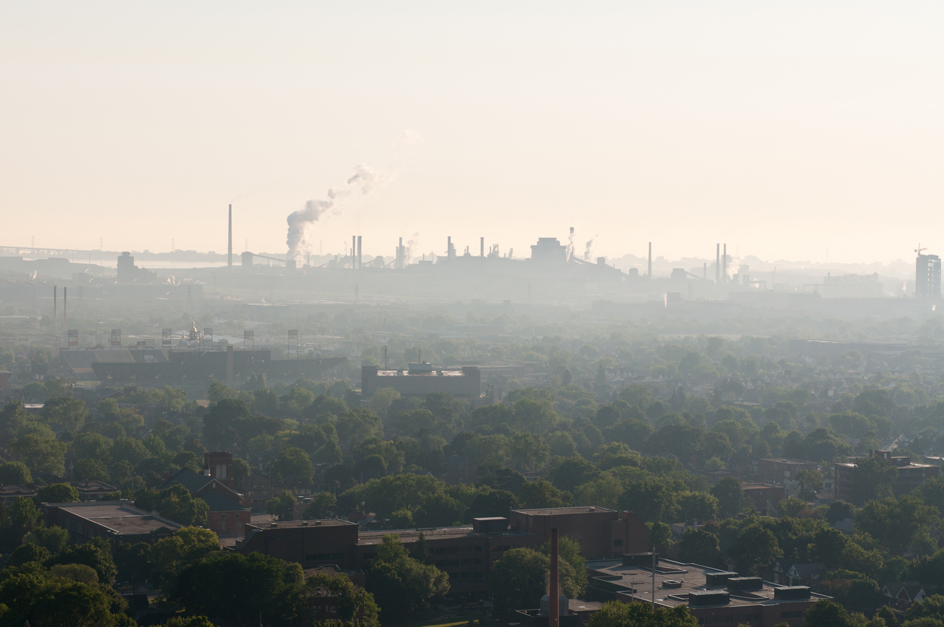 Ambient air quality refers to the concentration of pollution within a given airshed and changes based on the types and quantities of pollutants released into the local atmosphere. While pollution from human activities is the primary driver of poor air quality, weather conditions (wind, temperature, precipitation, etc.) and natural events (wildfires, volcanic eruptions) can also affect air quality.

To improve ambient air quality in Canada, the Canadian Ambient Air Quality Standards were developed collaboratively between federal, provincial, and territorial governments. Although there is no safe level of air pollution, the CAAQS establish baseline air quality standards for Canada that tighten every five years.

The figure also highlights major differences in air quality across cities. Hamilton, for example, had among the highest concentration of sulphur dioxide (SO2) emissions in the country (concentrations were higher only in Trail, B.C., and Saguenay, Quebec). Industrial activity—and smelters in particular—are the largest source of SO2 emissions in Ontario and likely contributed to these high levels in Hamilton (Government of Ontario, 2017). Levels of fine particulate matter were nearly twice as high in Saskatoon and Edmonton compared to St. John’s and Halifax, which were likely driven by differences in wildfire activity and heavy industry.

Air quality can also be dramatically different within a city, as illustrated by the concentration of nitrogen dioxide (NO2) in Vancouver, which was twice as high as many other cities. One of Vancouver’s two monitoring stations is located on a busy stop-and-go trucking corridor (Clark/Knight Street) that serves Canada’s busiest port. Concentrations of NO2 at this station were nearly twice as high as levels in downtown Vancouver (located only a few kilometres away), pulling up the city’s average. In these urban driving conditions, heavy-duty trucks can emit NO2 emissions equivalent to 100 cars (Badshah et al., 2019).

Lastly, the data in Figure 10.1 show that air pollution is not just a big-city problem. Ozone levels in Whitehorse, for example, were the fourth highest out of the 15 cities surveyed. Similarly, small and rural communities in southeastern and northeastern British Columbia have the highest levels of fine particulate matter (PM) in the country for 2017–18 (not included in the figure). Heavy wildfires during these two years were likely the primary cause of these high PM emissions, although emissions from forestry and resource extraction industries may have also contributed to poor air quality. Many Indigenous communities also grapple with poor air quality due to their proximity to industrial facilities and a heavy reliance on diesel generators in remote communities (MacDonald, 2019; CIRNAC, 2012). 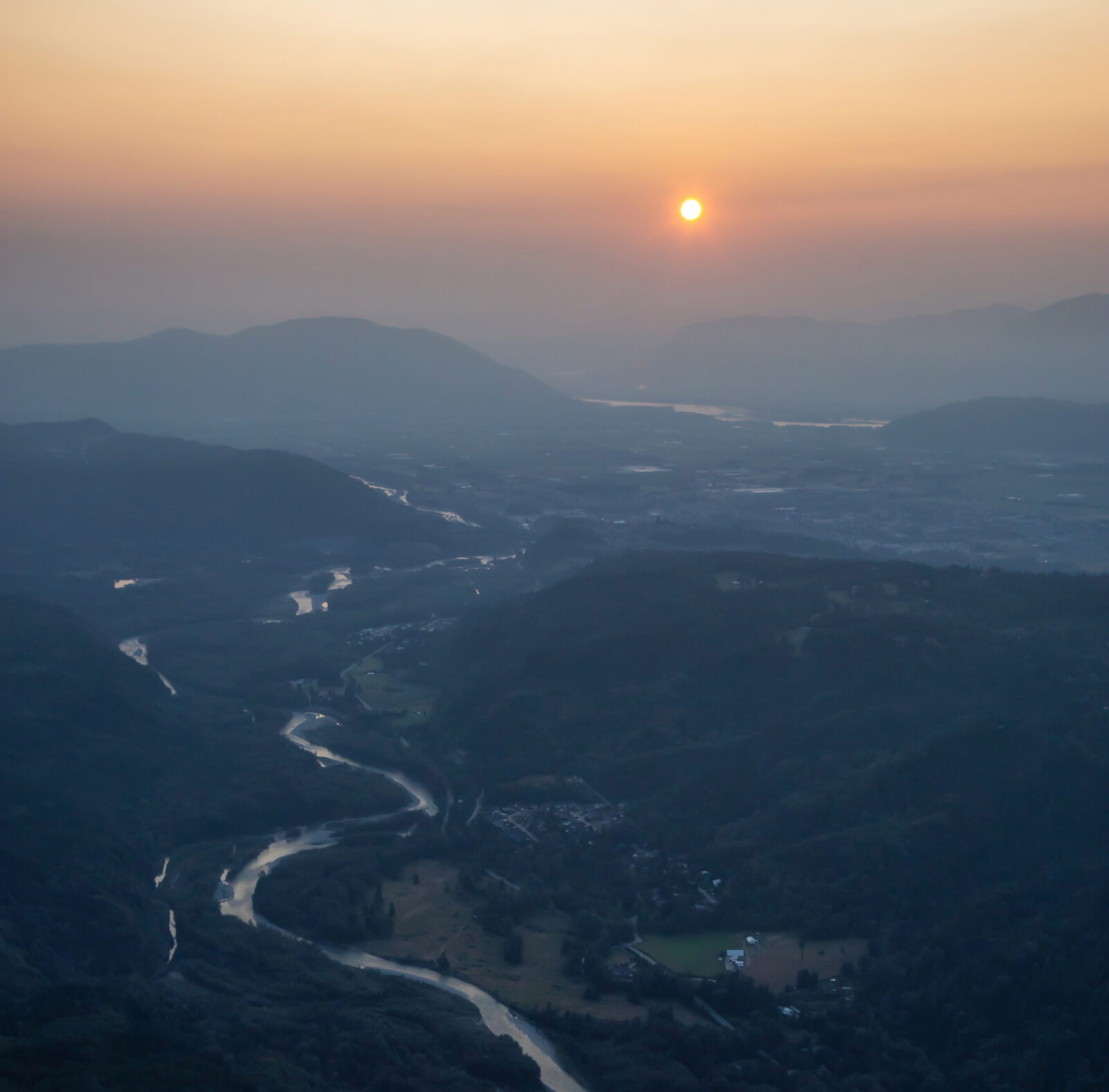 Air quality typically deteriorates in warmer temperatures. Concentrations of ground-level ozone, for example—a big component of smog—intensify in strong sunlight and heat. As global temperatures increase, the number of days with dangerously high levels of air pollution in Canada could increase, undoing some of the gains made over the past few decades in lowering air pollutant emissions.

Figure 10.1 helps illustrate that a large portion of the Canadian population is regularly exposed to harmful levels of air pollution (Health Canada, 2017; Health Canada 2019; CCME, 2017). Over 70 per cent of Canada’s population lives in urban areas where concentrations of air pollutants are highest (Statistics Canada, 2019; Landrigan et al., 2017). Nearly one-third of Canadians live within 100 metres of a major road or 500 metres of a highway, with over 10 per cent of all elementary schools and over 35 per cent of long-term care facilities located within 50 metres of a major road or highway (Brauer et al., 2013). At the same time, a large proportion of Canadians are exposed to transboundary pollution originating from the U.S., particularly in Quebec and Ontario (ECCC, 2017). In dollar terms, the health costs of air pollution are substantial. An estimate by Smith and McDougal (2017), for example, finds that the cost of fine particulate matter and ground-level ozone in Canada was between $26 billion and $48 billion in 2015. A broader analysis by Health Canada (2019) finds that air pollution causes approximately 14,600 premature deaths each year, at a cost of $114 billion—or seven per cent of Canadian GDP.1

Reducing the health risks from air pollution in Canada is closely tied to actions that address climate change. Indeed, one of the most significant opportunities to improve air pollution in the coming decades is capturing the co-benefits from policies primarily aimed at reducing GHGs. Mitigation policies directed at transportation, coal-fired electricity, buildings, and oil and gas extraction have the potential to significantly reduce air pollution. Table 10.1 shows the overlap between sources of GHG emissions and air pollutants.

Canadian governments have already made progress in implementing policies that address both air pollution and GHG emissions. The phase-out of coal-fired electricity in Ontario, for example, reduced SO2 emissions from Ontario’s electricity sector by 99.7 per cent and NOX emissions by 86 per cent (Government of Ontario, 2017). As a result, the number of smog days throughout the province decreased from 53 in 2005 to zero in 2014.2 It also helped reduce electricity sector GHG emissions by 87 per cent. Other notable air pollution/climate policies include efficiency standards for heavy machinery and vehicles and renewable energy policies that displace fossil fuel combustion (ECCC, 2016; 2018b).

Although Canada has good data on ambient air quality, governments can improve how they track trends in air pollution and its impacts on human health. Data from Environment and Climate Change Canada’s National Air Pollution Surveillance (NAPS) program (used in Figure 10.1), for example, are only available for 2017 and 2018 (ECCC, 2018a). Ideally, ECCC would make historical data (before 2017) publicly available while also publishing data for years 2019 and beyond. This data would help identify trends over time and areas where air quality poses the largest health risks. Making the NAPS data platform more accessible and user-friendly would also be helpful, as these data are difficult to find and collate.

In addition, expanding monitoring stations can help build a clearer picture of local trends and health risks. The NAPS program is missing data for several major cities (e.g., NO2 and SO2 emissions in Montreal, Quebec City, and Winnipeg) and in Indigenous communities.

Perhaps the biggest data gap is the inability to trace the local sources of air pollution in Canada. ECCC publishes extensive data on air pollution sources through its National Pollutant Release Inventory, but this dataset only covers major industrial (stationary) sources of emissions. It excludes air pollution from commercial and residential buildings, construction, and non-stationary sources, such as transportation, mobile equipment, and wildfires.5 Other datasets from ECCC do track emissions from each of these sectors but they are aggregated at the national level and of little use when examining local trends. Provincial databases (where they exist) also lack information on local pollution sources.

Without better data on the sources of emissions at the local level, determining the causes of air pollution in specific communities is a major challenge. We cannot say with certainty, for example, why NO2 levels in Vancouver are double the levels in other cities, or why Hamilton has extremely high concentrations of SO2 emissions. Better local data would allow policy makers and researchers to identify where air pollution is emitted and prioritize policies that tackle the biggest sources. Such data can also help identify policies that drive the biggest climate and air quality benefits.

More regional airshed modelling should be the ultimate goal of federal, provincial, and local governments. Regional airshed modelling combines data on ambient air quality, pollutant sources, and weather patterns to better understand how different air pollutants mix and move in the atmosphere and how the resulting ambient air pollution affects human health. Models, for example, allow researchers to estimate mortality and morbidity rates from air pollution in each community. These results can then be layered on top of other socio-economic data to see how air pollution affects the most at-risk populations (Indicator #9). Given that airshed modelling is computationally intensive (and expensive), governments could conduct this sort of analysis every five or 10 years to identify patterns and trends.