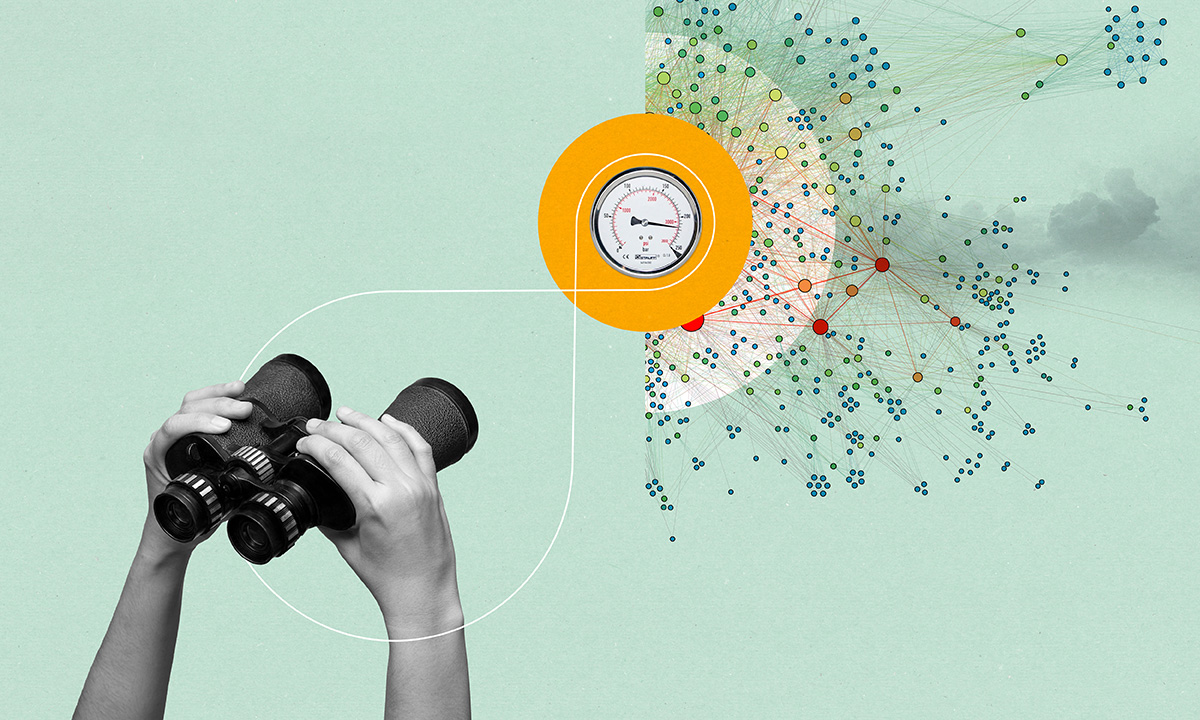 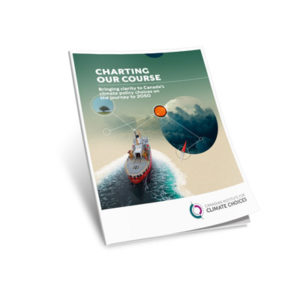 Uncertainty is no reason to delay action. The only viable strategy is to prepare for both climate change impacts and global decarbonization—hedging against possible future scenarios.

To ensure our future stability and prosperity, Canada faces choices now: the earlier we prepare, the more resilient Canadians and our economy will be to abrupt, costly, and disruptive change. Effective preparation will position Canada to leverage new opportunities as they emerge.

Canada also has an important role to play in influencing global outcomes. We can demonstrate leadership, work with international partners to reduce global risks and enhance opportunities, and develop the policy and technology solutions the world needs.

Canadians need clarity on the choices before us

It is time to move beyond the narrow silos that have characterized climate change policy discussions for decades and bring together a clear, integrated perspective that cuts across efforts to reduce emissions, adapt to a changing climate, and capture clean technology opportunities. We need to work together to identify and implement creative solutions that address a broader range of environmental, societal, and economic climate change objectives. Future generations of Canadians are counting on us to get it right.

This report aims to provide clarity on the climate change choices facing Canadians. It provides a starting point for a new conversation about Canada’s future in a changing world.

The remainder of the report is structured as follows:

Section 2 explores the drivers of global change and disruption that will shape Canada’s future. It helps define the scale and scope of risks and opportunities facing Canadians.

Section 4 considers how Canada can achieve its objectives, highlighting the policy levers available to governments and the importance of identifying ambitious and integrated solutions that provide multiple benefits.

Section 5 suggests a series of next steps for Canada to move forward on climate change.

The focus of this report is not on the science of climate change, which is detailed in reports by the Intergovernmental Panel on Climate Change (IPCC) as well as national scientific organizations such as Environment and Climate Change Canada. However, since science is the foundation for action on climate change, we provide a brief summary of the evidence below.

Global atmospheric concentrations of GHGs are increasing, primarily due to human activity

Between 1990 and 2018, average global concentrations of GHGs (measured as C02 equivalent) rose 43% (NOAA, 2019). According to scientific records, the last time concentrations of CO2 were this high was about 3 million years ago.

Although there have always been natural variations in the earth’s climate, human activity is the primary cause for the steep rise in the concentration of GHGs. These emissions are the dominant driver of global warming and climate change. Other factors, like changes in the heat from the sun and ash from volcanic eruptions (which block sunlight and produce a cooling effect) make only a small contribution to the observed changes (ECCC, 2019a; NOAA, 2019).

In total, the best available evidence and data suggest that human activities have caused a 1.0°C increase in global temperatures above pre-industrial levels. And if emissions continue at current rates, scientists estimate that the increase in global temperatures will reach 1.5°C between 2030 and 2052 (IPCC, 2018). The targets set out in the Paris Agreement are to keep long-term temperature increases beyond 2050 to under 2.0°C and under 1.5°C if possible.

The world’s oceans are absorbing most of the additional heat, increasing average temperatures and sea levels. Part of the observed sea-level rise is caused by the expansion of water as it warms. The other major factor is the steady reduction in the size and mass of glaciers and ice sheets that are on land, which, as they melt, enter the world’s water systems and increase sea levels (ECCC, 2019a). Melting ice (both on land and at sea) is expected to continue throughout the 21st century and could result in a nearly ice-free Arctic during late summers by the 2040s (NOAA, 2017; IPCC, 2014; Overland & Wang, 2013). In total, global mean sea level has risen about 20 centimetres since the late 19th century and about 7cm of this occurred since 1993. Sea-level rise increases risks of erosion, flooding, storm surge, and salt-water contamination of fresh water and soil in coastal areas (ECCC, 2019a).

At the same time, the world’s oceans are acidifying. Oceans absorb roughly a quarter of the CO2 emitted into the atmosphere each year, which increases acidity levels and decreases oxygen levels. The current rate of acidification is unparalleled in at least the past 66 million years (NOAA, 2013). Higher acidity and lower oxygen levels are projected to have negative impacts on marine ecosystems.

Warmer temperatures are also causing permafrost to thaw across Canada’s North, releasing stored methane deposits into the atmosphere. Although the science is still unclear on what this means for global temperatures, it is possible that thawing permafrost could accelerate the concentration of GHGs in the atmosphere and create a positive feedback loop of warming. Thawing permafrost also increases the risk of soil erosion, disappearance of lakes, landslides, and ground subsidence (Ciais et al., 2013).

Higher concentrations of GHGs in the atmosphere are expected to increase the frequency, intensity, and duration of many types of extreme climate and weather events. The clearest outcome will be an increase
in the number of days with extreme heat and longer and more intense heatwaves, along with fewer days of extreme cold in winter. In addition, the risk of drought and wildfire is expected to increase. The combination of higher evaporation rates, earlier snowmelts, smaller snowpacks, and the loss of glacier ice is expected to increase the risk of water supply shortages during summer months, particularly in parts of British Columbia and the Prairies (ECCC, 2019a).

Due to the lag between when GHGs are emitted and their eventual impact on the climate, scientific models suggest little variability in climate impacts between now and 2040 across different scenarios (ECCC, 2019a; IPCC, 2014). Beyond 2040, however, climate models show very different possible outcomes. In a low- emissions scenario, the average increase in temperatures for Canada is an estimated 2oC higher than the 1986–2005 reference period and would remain relatively steady after that. In a high-emissions scenario, the average temperature in Canada could increase by more than 6°C (ECCC, 2019a). In the figure below, the map on the left shows changes in average surface temperature under a low-emission scenario (IPCC representative concentration pathway or RCP 2.6) and the map on the right shows temperature change under a high-emission scenario (IPCC RCP 8.5).

High-emissions scenarios involve the greatest range of uncertainty. The earth’s systems are complex and have natural tipping points where, once crossed, could cause catastrophic and irreversible impacts. They can be triggered by positive feedback loops that cause chain reactions that rapidly accelerate climate impacts, such as the loss of Arctic sea ice, the Greenland ice sheet, or the Amazon rainforest (Lenton et al., 2008; Nobre and Lovejoy, 2018). While some of these feedback effects are known and can be quantified, and are included within climate models, others are less well understood or are unknown and cannot be quantified (IPCC, 2014; USGCRP, 2017; UNEP, 2017). Feedback loops can also interact with other natural and human- induced factors, adding an additional layer of complexity.

In 2015, 196 countries signed the historic Paris Agreement, which aims to keep the average increase in global temperatures well below 2° C in this century (relative to pre-industrial levels), and to “pursue efforts” to keep temperatures below 1.5° C. For any particular temperature threshold above pre-industrial levels (e.g. 2° C), there is a fixed total amount of emissions that cannot be exceeded (including all emissions that have already been produced since the start of the industrial period) (IPCC, 2018).

As part of the Paris agreement, each country set its own emissions-reductions target, known as Nationally Determined Contributions (NDCs). Current NDCs will not be sufficient to achieve the 2° C target. Achieving each of the NDCs would likely result in average global temperature increases of about 3° C relative to pre- industrial levels (UNEP, 2017). Canada’s target is to reduce emissions by 30% below 2005 levels by 2030, or 513 Mt. In 2017, Canada’s emissions were 716 Mt.