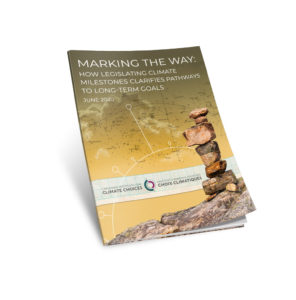 The details of how governments design and implement accountability frameworks, however, have important implications for how well the frameworks deliver on these benefits. Based on our assessment of international experience and our analysis of the opportunities
and challenges posed by the Canadian context, we make the following recommendations:

When implementing climate accountability frameworks, governments in Canada can look to the experience from other jurisdictions we present in our case studies. First, they should implement frameworks that include the common elements we identify in Section 2. To deliver on the governance processes and transparency mechanisms that a climate accountability framework requires to function effectively, all six of these common elements must be in place:

▶  Broadening the scope beyond reducing emissions

Second, governments in Canada should implement these common elements consistent with best practices. The best practices we identify in Section 2 include the following:

▶ Providing clarity on how milestones are set and will evolve

2. The federal government should set legally binding emissions milestones only at the national level

Legally binding milestones are particularly important at the national level given Canada’s commitments under international processes. As such, we provide additional advice specifically to the federal government.

We recommend that a federal climate accountability framework set binding milestones only at the national level. Legally binding sectoral or provincial and territorial milestones risk creating a rigid approach that raises the overall cost of reducing emissions. In the absence of a trading mechanism, binding subnational milestones would force GHG reductions in particular parts of the economy or regions when there are more cost- effective or practical options to reduce emissions elsewhere. Moreover, binding subnational milestones would require governments to directly confront difficult decisions about regional burden-sharing (sectoral milestones would do the same, albeit indirectly) only to have these debates resurface when the details of policy mechanics were being discussed. Forcing these debates to occur at the early, milestone-setting stage is likely to be divisive. It risks making it even more challenging to move over time toward better policy coordination and convergence in federal and subnational policy ambition.

However, it is useful to provide public information on the contributions provinces, territories, and sectors are projected to make to the national budget or target to illustrate implications of pathways rather than to prescribe explicit reductions at these levels. Detailed projections strike a balance by providing public, transparent projections for sectors and regions that can guide policy while still remaining non-binding. They can increase transparency, helping to inform challenging conversations about the contributions of different sectors and regions.

In terms of process, we recommend that the federal government set the national milestone pathway in consultation with other governments, stakeholders, Indigenous Peoples, and a non-partisan expert advisory body. Allowing the federal government to make the final decision, but with requirements that it consult widely, ensures that regional and sectoral circumstances and diverse perspectives are considered without paralyzing the pathway process. Similarly, including reporting obligations that require the federal government to justify its decision in the event it rejects the expert body’s advice creates incentives to ensure milestones are rooted in evidence and science.

3. The federal government should continue to create incentives for provinces, territories, Indigenous governments, and municipalities to implement stringent climate policies

Different orders of government have different policy instruments available. Efforts to tackle climate change will be most effective and efficient when a wide range of these instruments is brought to bear. Focusing only on federal levers, for instance, would force the federal government to rely on instruments that might not always be well suited to reducing emissions from particular sources. For example, only provinces and territories can implement building codes. Municipalities make many of the zoning and inf rastructure decisions that affect urban form and its implications for GHG emissions. Indigenous governments can best identify challenges and opportunities unique to their own context and inform or implement policy in response. A multi-jurisdictional approach offers a way of realizing the benefit of bringing an array of policy instruments to bear.

To implement such a multi-jurisdictional approach, the federal government should continue to encourage policy ambition, implementation, and coordination across all orders of government. Doing so would provide governments with both the opportunity and the motivation to customize policy according to local circumstances and priorities.

To ensure that overall climate policy in Canada is and remains sufficient to reach national milestones, the federal government should use federal policy “backstops.” This could include, for example, increases in the federal benchmark carbon price, increases to the stringency of the planned Clean Fuel Standard, or new policies altogether. Where possible, provinces and territories should have the opportunity to seek equivalency if they have policies that achieve equivalent outcomes. This would provide provinces, territories, and Indigenous governments with an opportunity to customize policy to fit their unique contexts, while still supporting national milestones and long- term targets.1

A collaborative, multi-jurisdictional approach will require complex and at times difficult engagement, assessment, and dialogue, but it also offers the best chance of making climate policy in Canada politically resilient. An approach that does not rely entirely on policy from one order of government has the greatest chance of avoiding backsliding in the event that new governments come to power wishing to reverse course on climate policy. On the one hand, encouraging provinces, territories, Indigenous governments, and municipalities to act meaningfully—and leaving space for them to do so—ensures that a strong base of climate policies will remain in place regardless of the future level of federal ambition. On the other, having federal climate policy backstops ensures that strong climate policy will remain intact across the country in the event that, for example, some provinces or territories elect governments seeking to repeal stringent climate policies (as has been the case with certain elements of the Pan-Canadian Framework). The potential to enhance political resiliency of climate policy is in fact the strongest argument in favour of a collaborative multi-jurisdictional approach.